Our mission and purpose is to prevent, protect, preserve, respect, and serve.

We carry out our mission through Fire Prevention, Investigation, Public Education and Training efforts, as well as by maintaining a quick and effective response for fire suppression, Emergency Medical Services and other emergency and non-emergency functions.

s 1 Department
On Monday, December 4, 2006, the City of Mesquite was awarded a plaque recognizing the Mesquite Fire Department as an ISO Class 1 Department. An ISO Class 1 rating represents superior property fire protection throughout the City.   It is a distinction that has been achieved by less than 60 communities nationwide, and it translates to lower fire insurance rates for our citizens and business owners.
Read more...

History of the Mesquite Fire Department
The Mesquite Fire Department was established as a volunteer department by the Mesquite Town Council in July 1912.  Mayor W. W. Bennett appointed Alva Summers as Fire Marshal, making him the City’s first paid firefighter.  A. F. Gross was selected as Fire Chief.  In 1927 the Department’s first motorized fire equipment, a truck built by the REO Motor Car Company and equipped with a Raney and Tobey Co. pump, was purchased and a building was rented at Main and Galloway to house the new REO.  This would become Mesquite’s first fire station.  Read more... 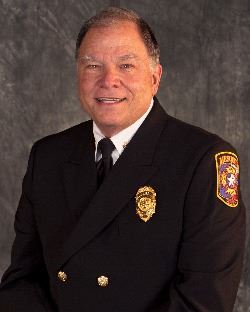