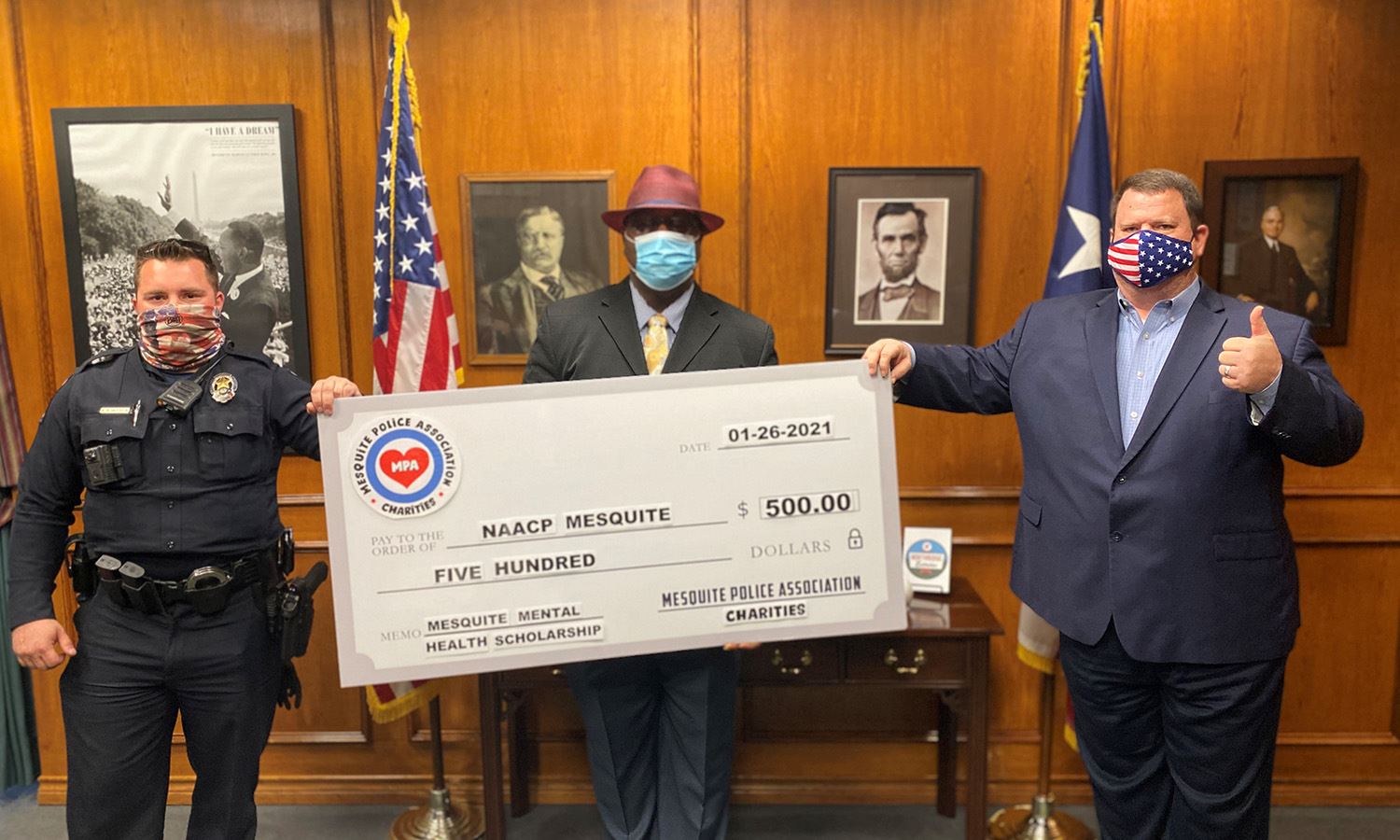 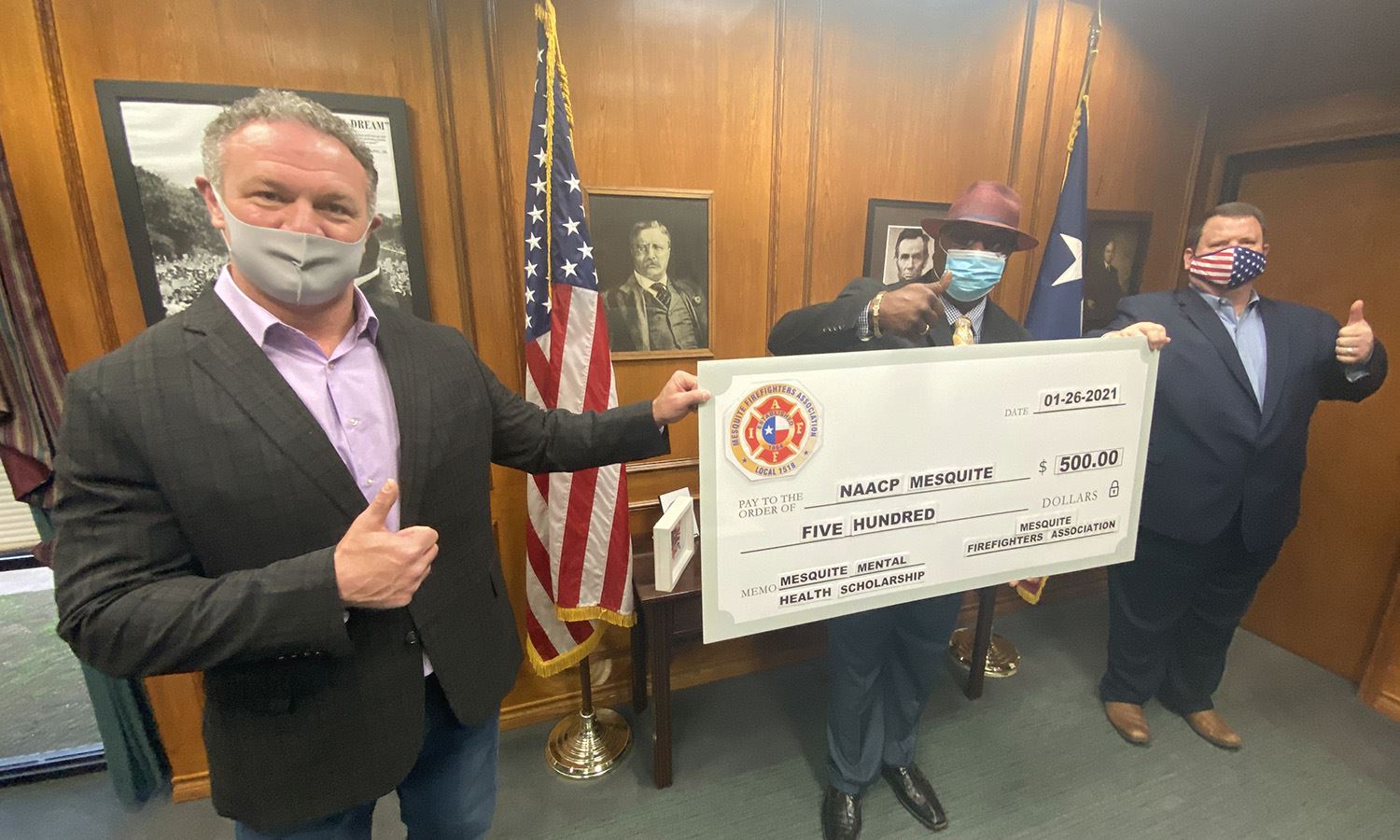 Mesquite, TX - January 26, 2021 – Today, the Mesquite Police Association and the Mesquite Firefighters Association-Local 1518 teamed up to donate $1,000 towards the Mesquite NAACP’s Mental Health Scholarship Fund that offers funding to students in the Mesquite Independent School District who want to pursue a degree towards a mental health profession.

Mesquite Mayor Bruce Archer said, “We are so happy to take this next step as one part of the City of Mesquite’s comprehensive plan to address the mental health concerns in our community. Mental health is and continues to be a major issue in communities across the country. The ongoing pandemic has added to the problem. It is a blessing to provide scholarships to local students who want to someday be mental health professionals, and perhaps return to Mesquite to aid us in our efforts on this issue.”

Mayor Archer shared that the City’s comprehensive plan continues to be developed and will include training for public safety responders handling calls for service involving a mental health issue and the addition of staff with expertise in mental health. He also indicated the City plans to continue working with community partners to ensure a multifaceted approach is in place when responding to calls for service that require a mental health professional.

Dallas Regional Medical Center represented by Chief Executive Officer Glenda Matchett donated in September to support the new scholarship initiative for students, followed by a contribution in November from the USA-Nepal Community Outreach Network led by local physician Vishnu Upadhyay. In October, the City announced it would begin offering its residents access to free mental health counseling and referral services through a new partnership with the AZAR Foundation in which residents can call 833-298-9111 to schedule a virtual or in-person session for individuals, couples and groups.

Mayor Archer explained, “All through America, in every city and in every state, we see the great challenges that mental health can bring to every community with the lack of support, help and treatment. Here in Mesquite we take it very seriously. Our City Council is committed to doing more and more to help with the various issues that make-up the mental health crisis.” 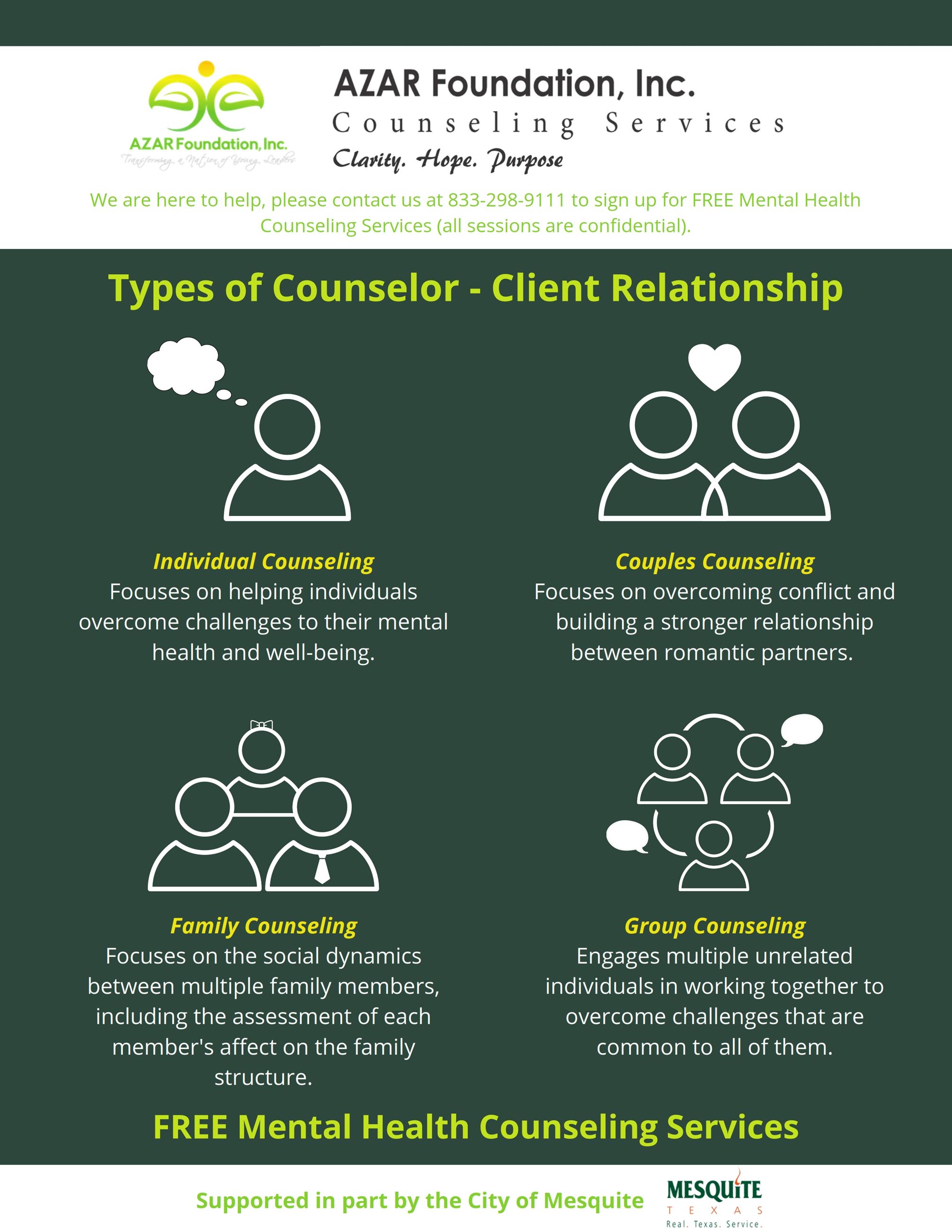 Mesquite, TX – October 26, 2020 – The City of Mesquite has announced it is offering its residents access to free mental health counseling and referral services through a new partnership with the AZAR Foundation. Residents can call 833-298-9111 to schedule a virtual or in-person session for individuals, couples and groups.

Mesquite Mayor Bruce Archer said, “We are so happy to take this first step as part of a large, comprehensive plan to address the mental health concerns for public safety responding to calls for service. Our immediate action with the AZAR Foundation partnership allows us to begin offering help to residents in need of mental health support.” Archer explained the $25,000 agreement with the AZAR Foundation will prioritize services to those residents referred by the Mesquite Police Department.

Mesquite’s Police Chief Charles Cato said, “We have responded to 81 attempted suicides so far this year. And, we have taken 703 individuals into protective custody in 2020, which is a 14% increase compared to 2019.” Cato shared the Mesquite Police Department has 90 officers with critical incident training and 14 are state certified mental health officers. He stated, “There is no shame in asking for help.”

The City’s comprehensive plan under development will include training for personnel, the addition of personnel with expertise in mental health and working with community partners to ensure a multifaceted approach is in place when responding to calls for service that require a mental health professional.

The announcement of the new free mental health services was made by Mayor Archer along with AZAR Foundation CEO Charlotte Allen. Allen said, “AZAR is pleased to be a partner with the City of Mesquite to provide mental health services to those in need. We are dedicated to the health and wellbeing of individuals and communities entrusted in our care."

In addition to Allen, Mesquite resident and survivor of suicide loss Shirley Weddle shared her story of losing her son Matthew in 2014 to suicide. She said, “There is a stigma related to suicide and mental health. It is important to understand that mental health is brain health which is physical health. We need to continue to bridge the gap between people and resources to understand the symptoms of suicide and how to get help.”

National Alliance on Mental Illness, the nation's largest grassroots mental health organization dedicated to building better lives for the millions of Americans affected by mental illness, offers these statistics on the issue of mental health:

Mayor Archer explained that mental health is and continues to be a major issue in communities across the country and shared the current pandemic has added to the problem. He said, “Medical professionals and healthcare studies have shown an increase in mental health issues due to the stress, depression and anxiety caused by the COVID-19 pandemic. The ‘COVID fatigue’ has created a serious problem of emotional stress. This surge in the mental health crisis has affected everyone from children, parents and employers, to the unemployed, healthcare providers, teachers and the list goes on – no one has been unaffected.” 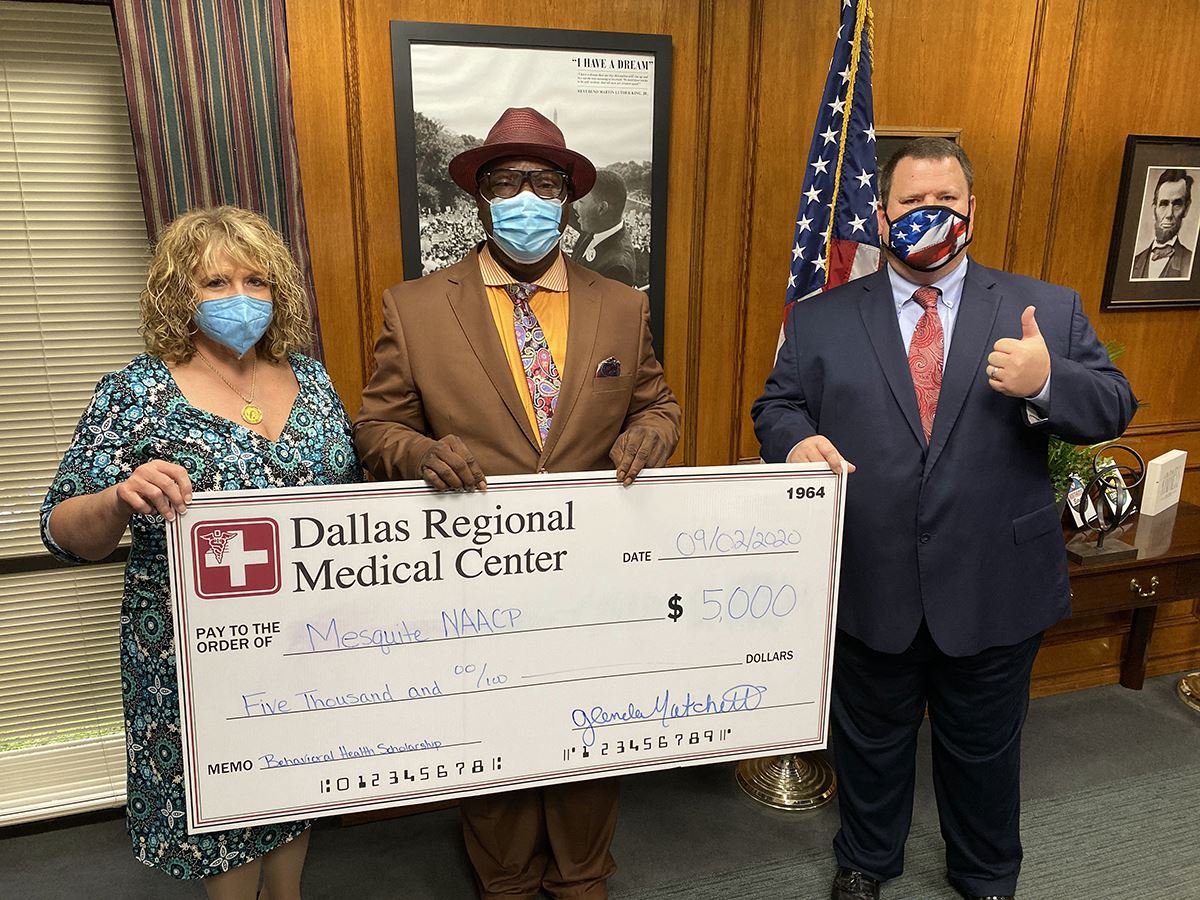 CEO Matchett explained, “When I met with the Mayor and he told me about this, I told him that this is something we want to be a part of. The more mental health clinicians we can put in our community in Mesquite, it is better for our patients.”

President Brown stated, “What we are trying to do is put together scholarships for students in MISD that want to pursue any degree in mental health. I am so grateful, I’m so happy, I could cry.”