The Opal Lawrence Historical Park is listed on the National  Register of Historic Places, is  a Recorded Texas Historical Landmark,  and recognized as a Century Family Farm by the Texas Department of  Agriculture.

Past Preserved: Restoration of the Lawrence Farmstead Outbuildings from Ron Siebler on Vimeo.

To volunteer as a docent for Historic Mesquite, Inc. and Opal Lawrence Historical Park, please call HMI at 972-216-6468. 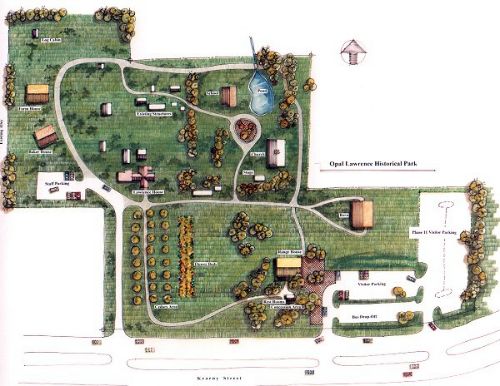 History of the Lawrence House & Family
Stephen Decatur Lawrence, son of John P. Lawrence of Maryland and Fannie Coats Lawrence of Tennessee, began building the Mesquite landmark Lawrence house in 1874, when he completed three rooms. In 1882, contractor Charley Florrer built an additional 14 rooms. Between 1886-1900, the kitchen and tower (belvedere) were added.

About the House
The home, which is considered Texas prairie vernacular styling, is basically in the same condition as it was originally built, with few modifications over the years. Outbuildings include a smokehouse, brick-lined root cellar, a wash house, large livestock barn (also built by Mr. Florrer in 1887) and mule barn. Assorted chicken coops also still are intact. The farmstead complex is representative of the evolution of domestic buildings from the 1870s to the late 20th century on the North Texas plains and blackland prairie. Lawrence family members continually resided at the home until November 1995.

About the Family
S.D. Lawrence was first married to Louisa Porter of Mesquite. They had three surviving children, including a son, John Lawrence, who served as mayor of Mesquite for three terms - 1917-1923, 1925-1928 and 1949-1953. His siblings were Ida Bell and Charley. As a widower, S.D. married his second wife, Louisa Hill Walker of Missouri. They had five daughters, Ruby, Pearl, Opal, Garnet and Onyx, and three sons, Eddie, Hugh and Hill.

S.D. Lawrence was no stranger to public life. He served on the committee to begin Mesquite ISD and helped to raise funds for the first Mesquite school buildings.

Opal Lawrence’s last will and testament gave the City of Mesquite the house and two acres. The City then purchased an additional 11 acres to include the barn and outbuildings.

Restoration Efforts
Historic Mesquite, Inc. (HMI) is currently raising funds for further restoration of the property, which includes the original brick-lined root cellar and smokehouse, washhouse, mulebarn and the New Hope Baptist Church building, which will be used for weddings and other special activities.

The Noah Range Farmhouse, donated to the organization by Galloway Avenue Baptist Church, is now the office of HMI and the visitors center to the park.  A special thanks to Benjamin Moore Paint for the wonderful colors on the house and barn and to the Quality of Life Corporation for funding.