As Mesquite continues to grow, reports of coyotes living in the city have increased. The following information is provided to help residents understand and co-exist with coyotes. If you see a coyote that is sick, injured, or acting aggressively, dial 911 immediately. Otherwise, if you know of a coyote living in your neighborhood, please report it by clicking here or calling Mesquite Animal Services at 972-216-6283. 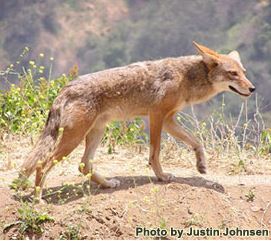 About Coyotes
Adult coyotes vary in color from gray to brown to yellow, are around 24 inches tall at the shoulder, and weigh about 40 pounds. They inhabit most of North America below the Arctic circle. Coyotes are generally nocturnal since they prefer to avoid daylight hours when people are most active, but it isn’t uncommon to see coyotes out during the day.

Coyotes are opportunistic predators and will eat most small animals, including cats and small dogs. Packs of coyotes are capable of taking prey as large as deer.

Coyote attacks on humans are uncommon and typically result in only minor injuries. However, coyotes do carry rabies, so medical treatment is often required to prevent infection. Since 1981, only two fatalities have been caused by coyotes in North America.

How to Reduce Encounters With Coyotes
The following precautions can reduce the likelihood of encountering coyotes in your neighborhood.

For all residents:
For parents:
For runners, joggers, and walkers: